IN THE CIRCUIT COURT OF THE SIXTH JUDICIAL CIRCUIT,

IN AND FOR PASCO COUNTY, FLORIDA


Objections to Bernie McCabe against Misdemeanor, Trespass In Structure or Conveyance, 2 Degree Misdemeanor.

IN THE NAME AND BY THE AUTHORITY FOR THE INNOCENT HUMAN BEING, TED JECZALIK BEING ACCUSED OF NOT TRUE ALLEGATIONS BY MR. BERNIE MCCABE, TED JECZALIK STATES THAT:

On August 16 Ted Jeczalik was invited by Florida Department of Revenue to come to The office in Holiday, Florida - See enclosed evidence number1.

Ted Jeczalik had license and as the tax payer in Pasco county has the right to visit any of his government offices to discuss his business especially as being invited by Florida Department of Revenue.

Ted Jeczalik has been coming to Florida of Revenue as invited, authorized and licensed for the passed 7 years and he never was acting against the peace and dignity of the state of Florida or anybody ells wrongly and without peace that is contrary to lies under oath by Mr. Bernie Mcabe.
As resident and tax payer I am uphold to lies of Mr. Bernie Mccabe especially when he does that under oath and using the wording Lord - indicating god.

The Deputy Sheriff who committed crime of domestic terrorism, violence against peaceful Ted Jeczalik and submitting lies in his report to put innocent Ted Jeczalik in Jail for crimes he has not committed, was filed to Pasco County Sheriff for investigation and to Federal Bureau of Investigations as Ted Jeczalik was on Duty working for Federal Government and the crimes of Deputy C. Key are being investigated right now.

The Citizens of Pasco County and Dr. Ted Jeczalik would like to ask Sheriff of Pasco County, Florida Mr. Chris Nocco to stop immediately employment of deputy C. Key and to start investigating the crimes and mental disability of deputy C. Key who terrorize Ted Jeczalik on Wednesday, August 16, 2017 in Holiday, FL showing irresponsibility, egoism, prejudicial behavior on the base of country of origin and criminal activity lying on his report.

C. Key has stole cellular phone from Ted Jeczalik and is refusing to return it.

The mental disability of C. Key including anger and verbal yelling profanity at his victims to submit them to his abuse and crime like threatening with physical violence for not giving him personal information to further commit his crime like asking for social security numbers.
C. Key lies about driver license is fake or no good to submit his victims to reveal private information like social security as he have to Dr. Ted Jeczalik.

Dr. Ted Jeczalik refused to participate in further crimes of C. Key and Dr. Ted Jeczalik has the responsibility and duty to take off the criminal with mental dangerous behavior off the streets before tragedy will strike again to our citizens in Pasco County, Florida by mental criminal in Sheriff's jump suite.

After Dr. Ted Jeczalik has been physically and verbally threaten and terrorized by C. Key, the deputy used excessive force to inflict on his victim as much pain as possible with hand cuffs. When the victim made remarks about pain, C. Key said with smile, "everybody says that... " and with a pleasure threw Dr. Ted Jeczalik to Pasco County Jail driving for about an hour, refusing to put seat belt on his victim and himself while psychedelic music was entertaining indicating possible drug use by deputy C. Key.

95% of arrest report by C. Key is not true and is again purposely fabricated by C. Key indicating corruption or total lost of mental reality where prejudice for his pray is rather obvious.

Body cameras video from C. Key was not submitted to Dr. Ted Jeczalik including his own evidence on his phone that was stolen by C. Key and C. Key refuse to return stolen phone to his victim where possible tempering and deleting of evidence may occurs as video made by Dr. Ted Jeczalik on his phone clearly showed C. Key in his mental rage. New phone has to be purchase as lawlessness of C. Key continues with $200.00 per day losses in business and personal income by Dr. Ted Jeczalik. dr. Ted Jeczalik was on duty at his work involved in Federally regulated transportation where the company incurred thousands of dollars for not being able to carry his duty because of criminal activity of deputy C. Key arresting Dr. Ted Jeczalik for crimes he never committed.

Dr. Ted Jeczalik stand up for his human rights, constitutional rights against violence and corruption, intimidation, lies and psychopathic mental behavior of inflicting mental and physical pain to his victims C. Key placed innocent human beings, with out any probable cause or crime to Pasco County Jail.

STOP THE VIOLENCE AND CORRUPTION OF SHERIFF'S DEPUTY C. KEY IN PASCO COUNTY, FLORIDA WHERE INNOCENT VICTIMS ARE BEING USED AND ABUSED FOR CRIMES THEY HAVE NOT COMMITTED BY SUFFERING IN PASCO COUNTY JAIL.

The citizens of Pasco county and Dr. Ted Jeczalik.
Below is the Evidence of  the Florida Department of Revenue who's Manager in Holiday, FL  wrongly implemented innocent Ted Jeczalik into trespassing and the manager called police for no other reason but to stop Ted Jeczalik from his right to get evidence in his case:
Evidence is in public domain at: http://www.opm.bz/no-to-tyrrany/ted-jec.html

Ted Jeczalik is filing criminal charges against Florida Department of Revenue and the manger who's crimes are rampant just to legally extort money from the victims like Ted Jeczalik. The victims of the manager have the constitutional right to present evidence against the criminal activity of Florida Department of Revenue yet the manager calls police to avoid her crimes accusing innocent victims like Ted Jeczalik for not paying  child support.

The manager decided to get vangence and she filed next day another notice to suspend Ted Jeczalik driver license knowing he is truck driver and unjust suspension of driver license was send a month before.
Ted Jeczalik pays child support every month according to his income not $1283.00
Evidence of crime: 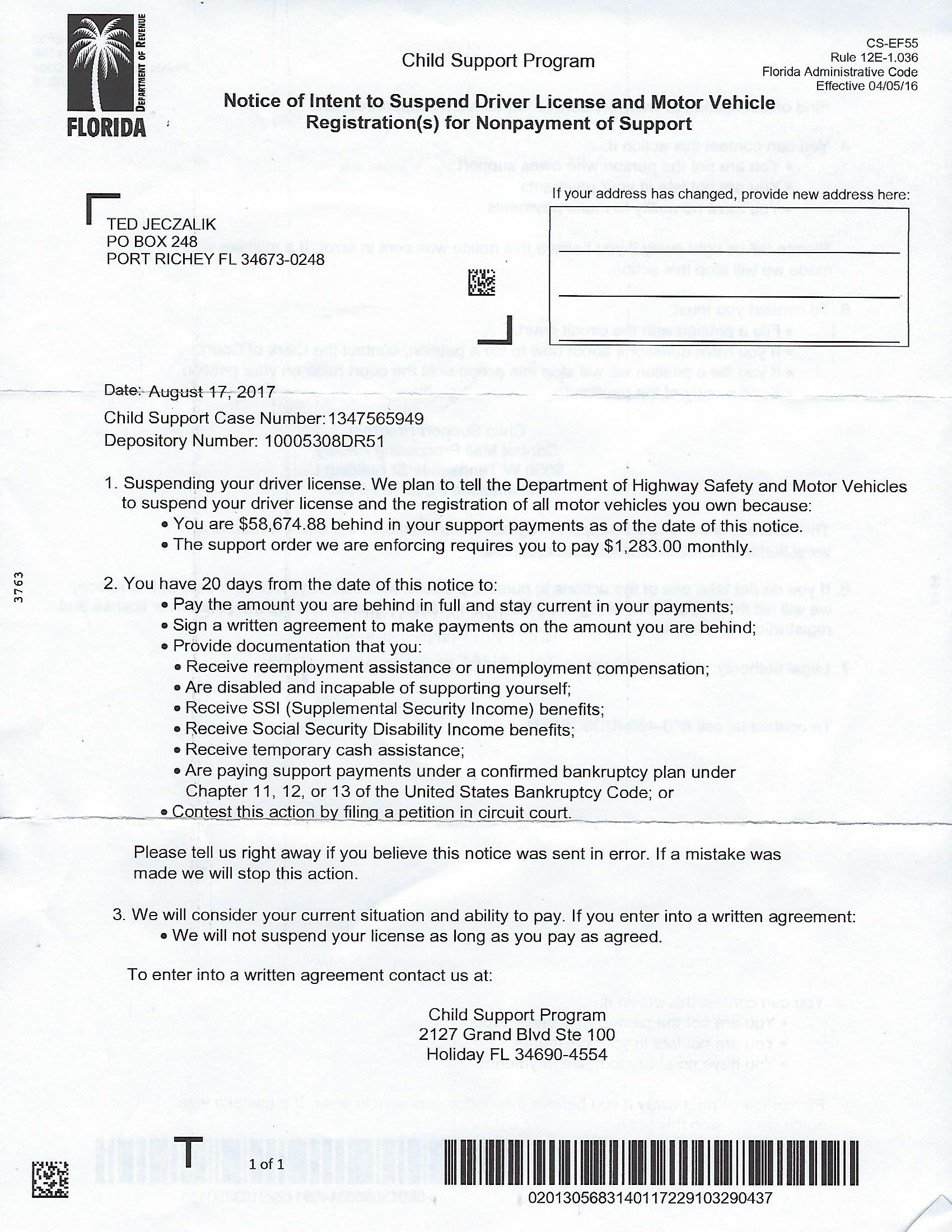 There was no trespassing and the manager lying to the sheriff deputy resulted in arrest of innocent human being: 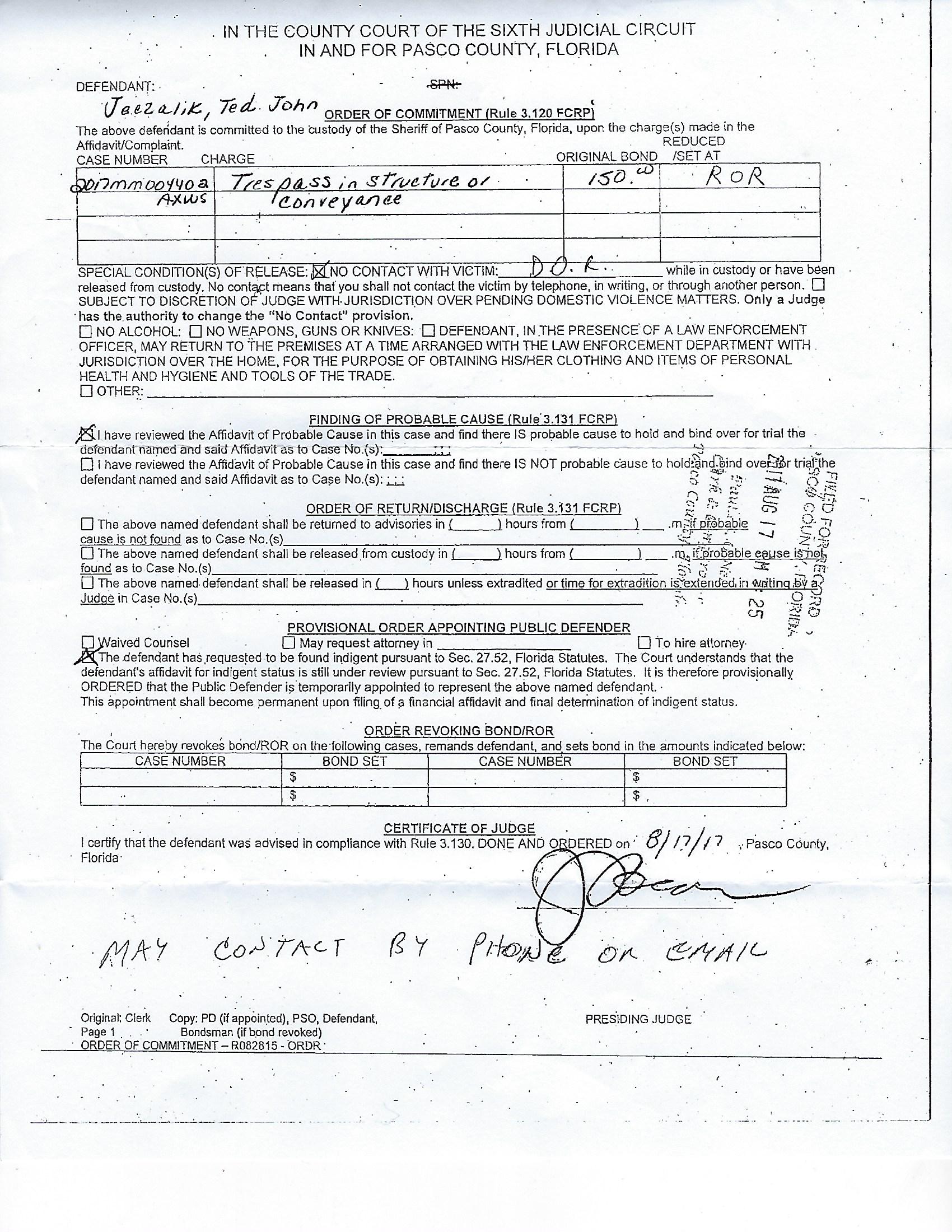 Florida Department of Revenue scam to put their victims away from the crimes of legal extortion: 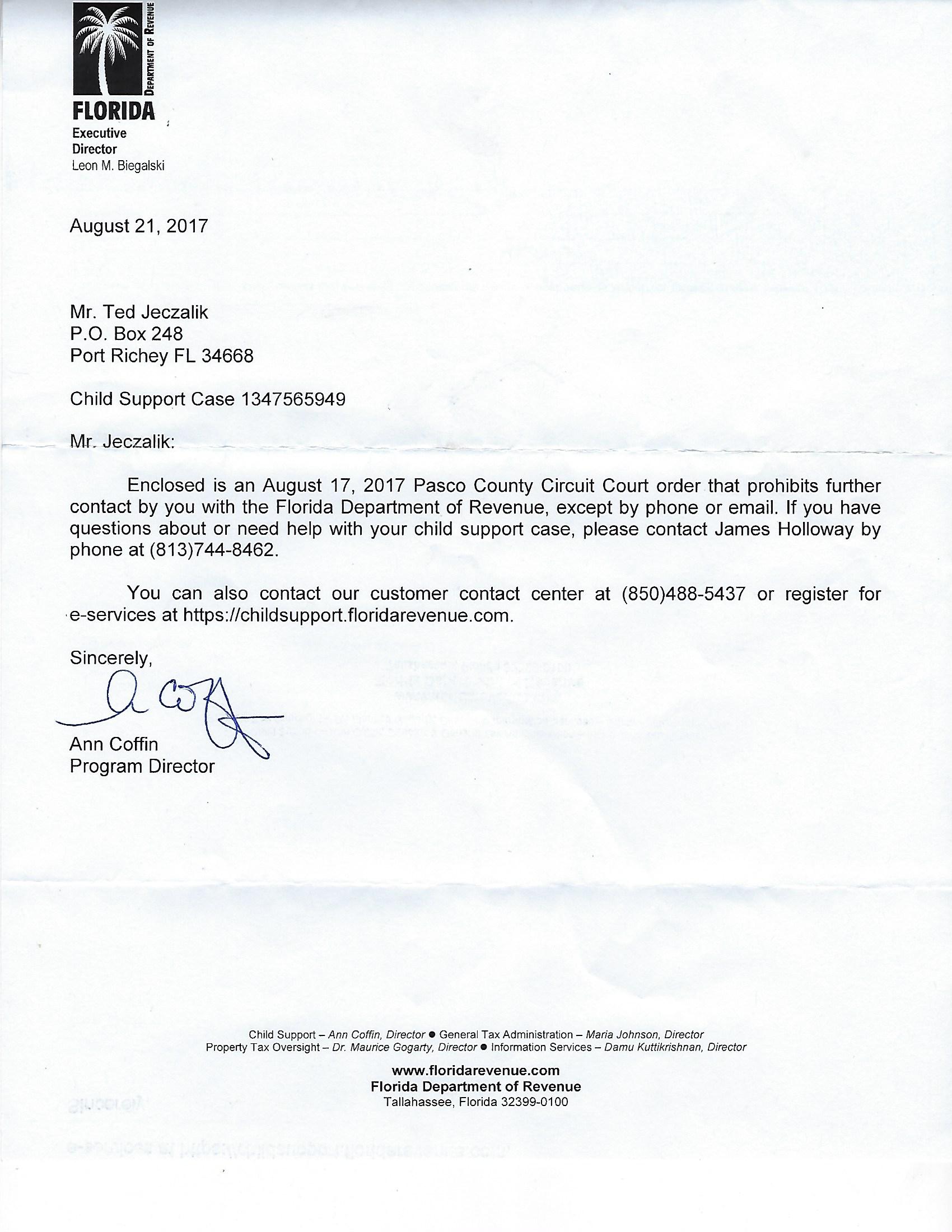 The people of Florida and the victim Ted Jeczalik are asking to take immediate action against criminal, the manager working at Florida Department of Revenue in Holiday, Florida.
Stop the Atrocities against the people by Florida Department of Revenue corrupted manners and corrupted manager in Holiday, Florida!!!
The Victim - Ted Jeczalik